Seen some weird Facebook ad examples? Everyone and their dog hustling to sell you something you don’t need? The smart way is to create ads that actually don’t look like ads — but the Facebook ads on this page are in a league of their own! See what you think…

People don’t hate ads, they just hate ads that aren’t relevant to them.

Do you ever get served up unusual ads that kind of don’t really fit?

That I’m not into gambling and vegetarian doesn’t seem to matter.

But then again, maybe not.

Most of us start with a simple Facebook ad budget of a few dollars a day.

But anyways, I thought I’d grab some weird Facebook ads examples that were served my way.

So let’s get started…

1. Who Does Social Trading?

Not sure about you but at first glance I have no idea what this ad is about.

And you know we have like 3-4 seconds to grab the eye (and stop the scroll), right?

At first glance I know it’s Israel Adesanya who is one of the the best UFC fighters like ever.

But what is a social trading system?

Maybe this Facebook ad is designed to push the curiosity factor so we click to find out!

I guess they offer tickets to a UFC fight for er doing something. Anyways, that image would probably grab an enthusiasts attention. But I think that ad needs more work.

What do you think?

Remember, most folks have scrollitis and they’re thumbing hard and fast through their screens. 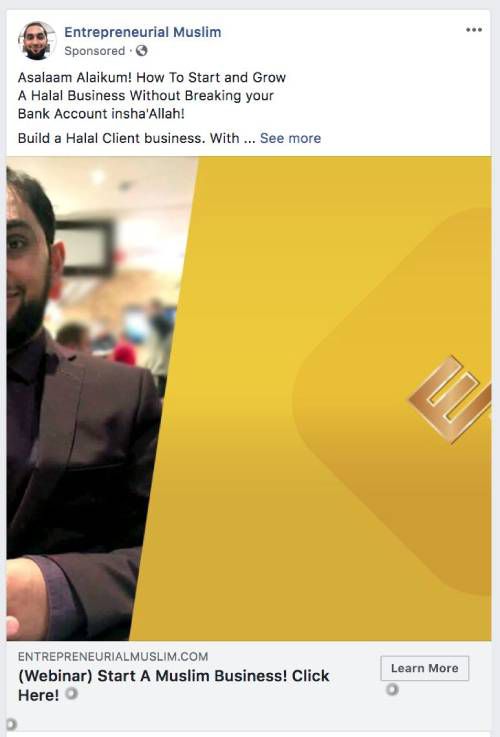 An entrepreneurial muslim business? Actually the niche itself is quite specific so I think that’s clever.

But what’s that big golden, diagonal slab doing there?

Why not a pic of a smiling muslim person? And do you need to start a “Muslim Business?” Or are you just targeting entrepreneurial muslims?

Or is it a Halal business you want to start?

Dear designer, please contact me and let’s have a go at a total re-do, shall we? 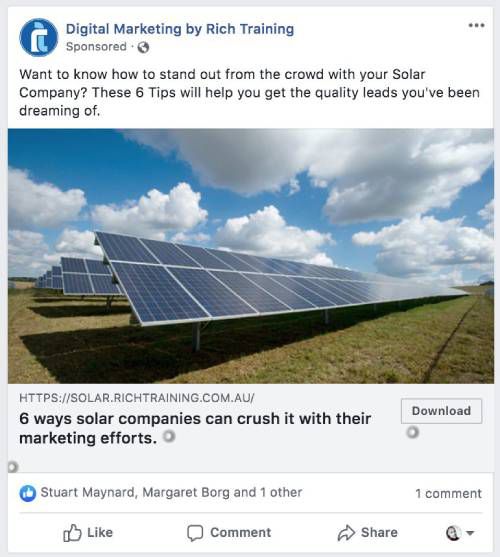 First thought: Why is a solar company advertising to me? Hmmm.

I mean I’d like to have a solar company but I kind of haven’t got one yet. Or like, even ever thought about it…

But if I did, then these folks will happily give me training to help me stand out from the crowd.

Targeted correctly, you could probably do well with this Facebook ad.

A lot of solar companies are pushing hard and the world is turning to renewables, despite the old school dinosaurs holding tight to their fossil fuel vision.

So, separating yourself from all the other solar companies makes sense.

To win with this ad, make sure to target people who preferably have some renewable, solar type company, not just those who look at tiny homes and renewable type websites! 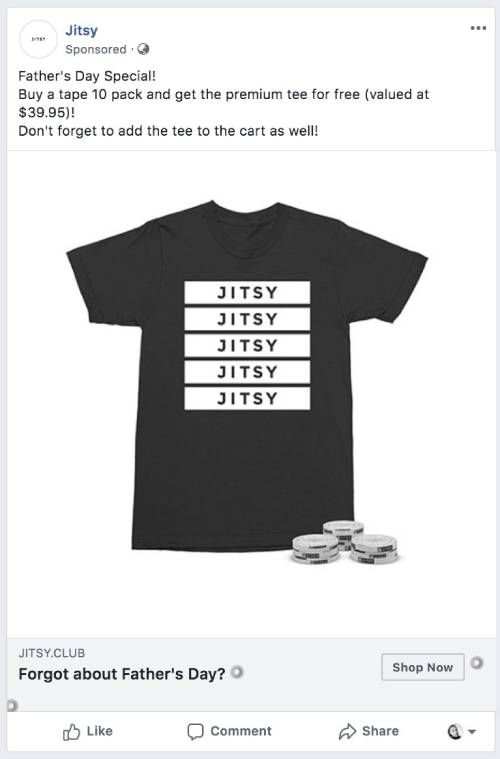 Jitsy? Maybe you know what this one means…

Because I really, really don’t know.

You know, I can’t quite tell what’s going on in this weird Facebook ad.

I’m wondering what Jitsy is, and what a Tape 10 Pack is too.

That might explain why it’s got no shares or likes.

Remember, a confused mind always says no. When I look at that image / ad I am puzzled…

What is it offering? What are the benefits?

Maybe you can enlighten me? 🙂

But the t-shirt idea I like. Maybe try an original Hurley art photo t-shirt instead? 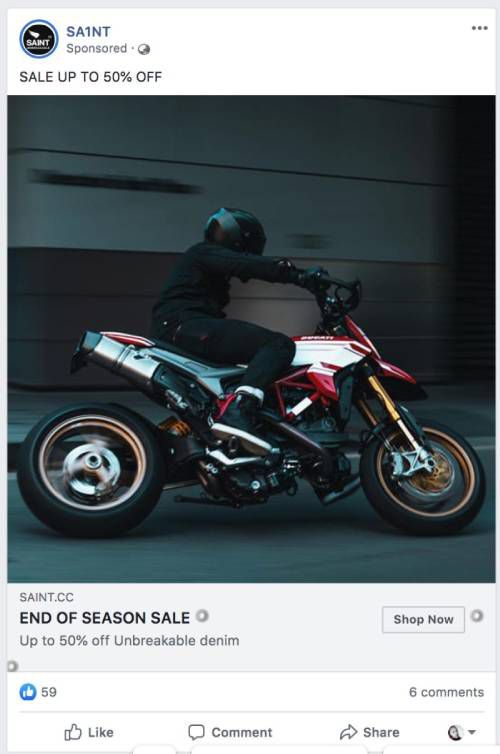 Denim? No idea but nice Ducati!

Ah, I know that’s a nice Ducati (Hypermotard 950 I believe) in there so that part gets my attention.

But the rest, maybe you know?

Looks like something to do with denim pants for motorcycle riders. An end of season sale perhaps?

If you know what this Facebook ad is about you might get 50% off whatever is on sale. 🙂

Having said that, I’d rather wear unbreakable denim protected clothing on a motorbike than most other gear.

To be honest I’m learning a little Spanish at the moment so this Clean My Mac Facebook Ad probably noted my Spanish language website visits and then followed up.

Actually they kind of have the targeting correct. I’m a Mac fan boy so that part is right. But I already use (and own) Clean My Mac…

In fact I even promote it myself, on a certain Youtube video. 🙂

You’d probably do best to serve this ad to me in my native language (English).

Until I’m quite proficient at Spanish that is.

10 points for trying though.

Not sure what “digital build” means though. Do they mean digital rubbish or all the gazillion folders I never use on my MacBook Pro?

Positives: Great images would get my attention as a Mac enthusiast.

Crazy looking ad but with 59 shares, and a few good likes, they’re doing something right.

Although the designer might find they can improve click through rate with a better designed image to text concept, maybe?

Then again, maybe that text overlay on the blue background grabs the eye?

The question becomes: would you stop your scroll for this?

So there’s a whole bunch of weird Facebook ad examples. Or maybe not so weird.

If you want me to create a Facebook ad for you then I’d be happy to give it a shot!

So that’s my weird Facebook ad examples. And just so you know I’m not really an expert on this stuff. I just have strong opinions on it! Leave a comment below… 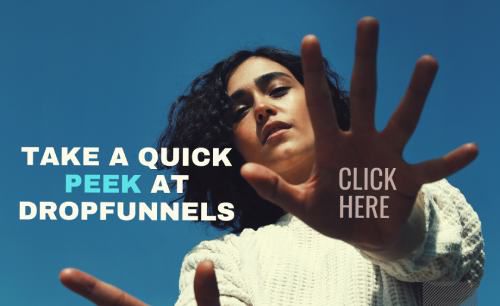